A Boon for Bitcoin? Italian Government Proposes Tax on Savings in Held in Bank Safes

The Deputy Prime Minister of Italy has proposed a new tax on cash and other valuables held by citizens at banks. If actually imposed, the measure could drive people towards Bitcoin as a way to keep their savings safe from cash-strapped government ministers.

The proposal comes as rising geopolitical tensions are impacting other investment markets, making value held in cash and other valuables a more attractive option for many.

Would the Italian Government Coming After Private Savings be a Catalyst for Bitcoin Adoption?

According to a report published earlier today by Reuters, Italy’s government may consider taxing its citizens’ private savings held in safety deposit boxes at banks.

The report states that the nation’s Deputy Prime Minister, Matteo Salvini, made the proposal on a late night TV programme yesterday. It was picked up by the domestic press this morning.

Salvini reportedly stated that he had been informed that there were hundreds of billions of euros stored as cash and other assets in safety deposit boxes around the country.

He described the savings of his citizens as being “substantially hidden” money, implying that the government has some ordained right to know what the Italian people as individuals have managed to save.

He went on to state that citizens that were open about their holdings would be taxed at a lower rate than those who were less forthcoming with information about their savings.

If the Italian government do implement such a measure, its citizens may very well turn to other means of storing value to protect their savings. One Bitcoin proponent mused that such a policy could be favourable to the crypto asset via Twitter earlier today:


This is bullish for bitcoin

Italy could end up being the best thing to ever happen to bitcoin. 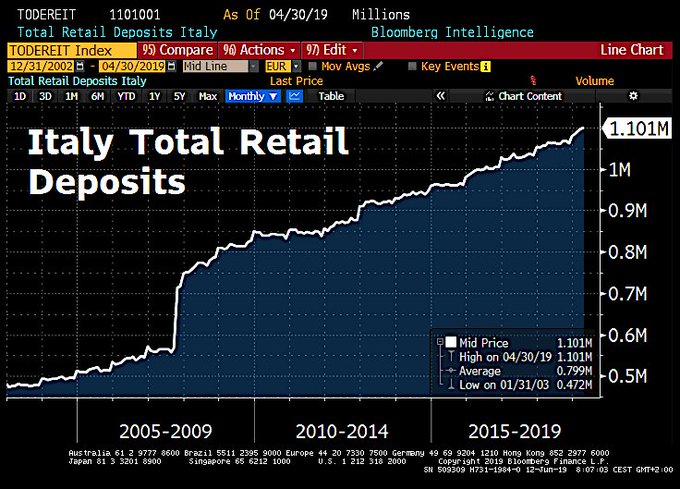 
65 people are talking about this

As highlighted in the above Tweet, the news comes as Italian retail deposits hit a new all-time high and geopolitical tensions continue to rock European markets. A recent report by Financial Times shows that share prices of the Eurozone’s largest companies recently hit a five month volatility peak. Tensions in Europe itself relating to Brexit and geopolitical worries overseas caused by the ongoing US/China trade war and fear of the pending collapse of a nuclear accord with Iran are driving the current instability.

Therefore, it does indeed seem possible that some of those Italian investors on the lookout for a safer haven than traditional markets and concerned about the government taxing their savings may well turn to Bitcoin. That said, given the perpetual volatility of Bitcoin, it remains unlikely that the crypto asset market will see any serious influx of capital in the form of life savings of Italians being poured into the market.

However, given that Bitcoin is much harder for governments to come after than funds held in safety deposit boxes and that the market is entirely uncorrelated to stocks or fiat currencies, it still seems plausible that some will take a high risk/high reward hedge against the current fiat system that seems to be edging ever closer to meltdown.