And just like that, Bitcoin (BTC) is right back above $9,000. The past 72 hours have been absolutely stellar for the crypto market, as it saw all digital assets gain notably across the board. BTC, most notably, moved from the low-$8,000s, where analysts expected heavy resistance, to $9,300 where it stands right now.

Related Reading: If History Rhymes, Bitcoin May Be Trading Around $12,000 By the End of July

With this, the bullish cries of traders all across the industry have returned, despite the fact that they were calling for a massive pullback just weeks earlier. But, what exactly are they commentators saying? And more importantly, where does Bitcoin and the asset’s ilk head next?

Earlier this week, Fundstrat Global Advisors’ Rob Sluymer remarked that Bitcoin could find resistance in the $8,800 to $9,000 range. Indeed, during the rally in late-May, BTC stumbled to surmount that range, perpetually scaling back after temporarily tapping prices above $9,000.

But, on Sunday morning, this trend was denied. Hard.

Almost as if $9,000 was nothing but a sheet of soggy parchment paper, Bitcoin broke past it, leaving no shorts unliquidated. Let’s take a closer look at what exactly traders are saying on the Twitterverse.

Analyst Credible Crypto remarked that while last week’s candle was very bearish, the rapid bullish retracement is a sign that buyers are ones in control of the market rather than sellers. Credible adds that while the candle has yet to close, it seems as though BTC’s next stop would be in the high-$9,000s and low-$10,000s, which is where the next line of heavy resistance lies.

$10,000 is where BTC topped in last years’ bear market rallies, and where the asset found heavy resistance on its way up during the legendary 2017 boom. 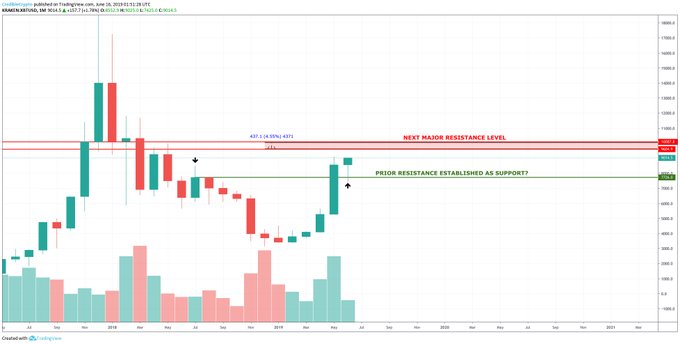 
Although last week's candle was very bearish, this weeks candle retraced the entire thing which is incredibly bullish. Official close is tomorrow, but thus far just looks like a retest of the monthly breakout level. Now targeting the resistance in the red region above us. $BTC


30 people are talking about this

Others are sure that BTC may continue higher. They look to the speed of the recent retracement, coupled with the fact that the impending closure of Binance.com for United States traders will likely cause a further capital flight from altcoins to Bitcoin.

Anyhow, regardless of what happens in the coming days, most are coming to the conclusion that a retracement is now not on the table, in spite of what was said just days and weeks prior. For those who missed the memo, many were expecting for a massive 30% retracement to the $6,000 range after a number of technical signals flashed bearish last week.

Now, however, the bulls are on parade. Trader Nunya Bizniz, known for his accurate noticings about historical market patterns, recently noted that if the weekly Bitcoin candle closes above $8,800 or so, BTC’s weekly chart would have printed a pattern that preceded massive multi-week upswings.

But few know exactly how that will play out at the moment. 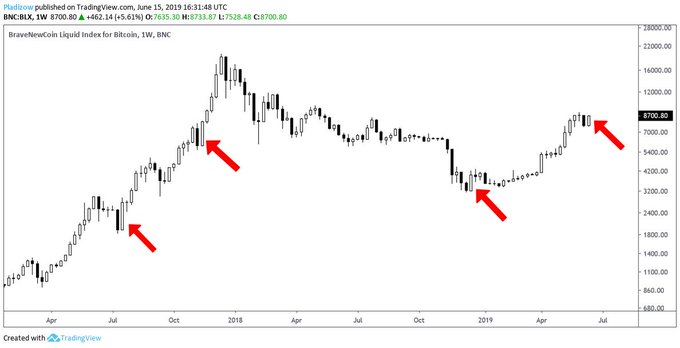 
21 people are talking about this