Bitcoin Defies Correction Calls, Where Will BTC Go Next?

Bitcoin’s epic weekend pump has continued into Monday as gains are holding. BTC is still above $9k but has hit resistance once again. Analysts and traders are looking for its next move and some are now eyeing altcoins for bigger gains.

Bitcoin surged through resistance yesterday to record a new 13 month high of just north of $9,300. The move resulted in 8 percent on the day for BTC has it pumped from around $8,600 to its highest price of 2019. A small pullback occurred but it retested this price a few hours later forming a double top on the day.

A larger pullback then took Bitcoin back down to $8,850 but it has since recovered again and is heading upwards during the morning’s Asian trading session. At the time of writing BTC was trading at $9,100, marginally higher than yesterday morning.

Daily volume has also pumped back up to $23 billion taking Bitcoin’s market capitalization to $162 billion, higher than that of the total crypto market back in March. Bitcoin market cap has not been this high since May 2018.

What is Next For Bitcoin?

Traders and analysts have been looking at the Ichimoku Cloud, which is a collection of technical indicators that show support and resistance levels, as well as momentum and trend direction. The weekly candle has opened inside the cloud which is bullish and could result in further upwards momentum;

“$BTC – found resistance right at the lower cloud and has opened the weekly candle inside the cloud. This represents the highest time frame that #bitcoin has breached into the cloud…with resistance at just above $10K…” 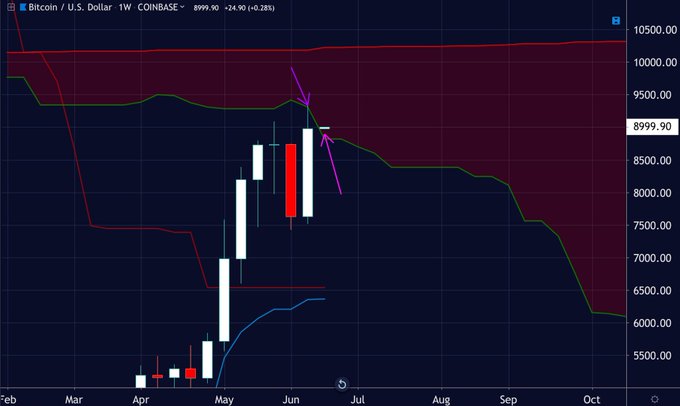 $BTC - found resistance right at the lower cloud and has opened the weekly candle inside the cloud. This represents the highest time frame that #bitcoin has breached into the cloud...with resistance at just above $10K...


39 people are talking about this

Looking at next moves for BTC, the analyst added;

“one more step up the mountain as #bitcoin hits right at the 38.2% fib resistance making it the next target for the bulls to close over and also makes maintaining the 23.6 fib support that much more important for overall continuation…”

The 38.2% Fib level is pretty much were BTC reached during May last year when it started to fall from over $9k so this does form a natural resistance level. It is an obvious take profit zone so could well be tested again with a bounce to the low side.

Current chart patterns are mirroring those from previous market cycles which could also give indication as to where Bitcoin will go next. Trader ‘CryptoHamster’ pulled out a chart from the 2013 bull run which shows similarities with what is occurring now; 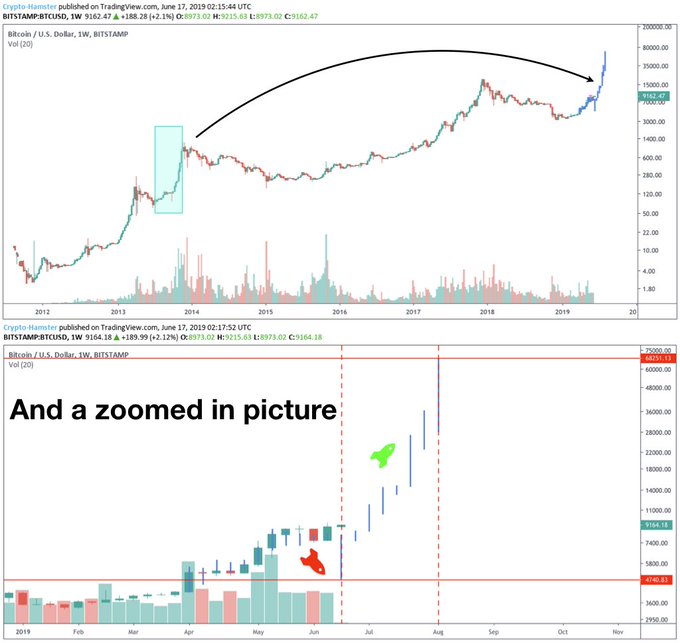 
When you try to find similarities between the current price action of #bitcoin and what happened in history...
(Don't really think that it will play out, but if it will, short-term bears will be super-happy, i guess.)$BTC $BTCUSD

Many have been waiting for a correction back to $6k but this is looking more distant as the days go by and Bitcoin continues to make new 2019 highs. A big 30 percent plus dump from current levels will drop BTC back to $6,400 which, coincidentally, was the most traded price in 2018. But as we have seen, BTC has done the opposite several times this year, as predicted late last week the consolidation cracked with Bitcoin’s latest move.