Bitcoin and the aggregated crypto markets have faced an extension of the downwards pressure that they have been battling with over the past several weeks, which briefly sent BTC back into the four-figure price region before it found some buying pressure that allowed it to climb slightly higher.

Analysts are now noting that BTC is nearing a price level at which it may reverse its recent downtrend and continue its upwards ascent, but this sentiment comes at a time where fears are growing regarding US President Donald Trump possibly banning Bitcoin.

Fears Regarding a US Bitcoin Ban Grow, But Are They Realistic?

At the time of writing, Bitcoin is trading down nominally at its current price of $10,555, which is down slightly from its daily highs of $10,700 but is up from its recent lows of roughly $9,900.

The downwards pressure that has led Bitcoin back towards the four-figure price region was first sparked when the crypto sharply rose to $13,800, which proved to be an unsustainable rally that subsequently led to an extended period of sideways trading.

Despite this, many analysts and mainstream news networks have attributed BTC’s recent bout of volatility to President Trump’s criticism of the cryptocurrency, which has since sparked fears regarding either a ban on Bitcoin or an imminent regulatory crackdown.

Alex Krüger, a popular economist on Twitter who focuses primarily on cryptocurrencies, spoke about the plausibility of a ban on BTC in the US, noting that although it is feasible, it is highly unlikely.

“TL;DR: A Bitcoin ban in the US is feasible. Ban could come via a Trump executive order. Ban could be over-turned. Probability of a ban is extremely low. Probability increased last week. Regulatory risk keeps many institutions away. A ban would see $BTC crash rapidly,” he explained in a recent tweet.

25 people are talking about this

Will Fears Contribute to Downwards Pressure on BTC, or Will Bull Trend Persist?

Importantly, as Krüger noted, even the slight possibility of a US crackdown on Bitcoinand cryptocurrencies could be enough to hinder any positive price action, as institutions and other investors may be weary of the markets.

Despite this, analysts are noting that the crypto’s positive reaction to its brief dip below $10,000, and its current push towards its next level of resistance, could be a positive sign.

“$BTC Update: Current levels that I’m watching on the chart,” Josh Rager, a popular cryptocurrency analyst on Twitter, said, while referencing a chart that shows that BTC is currently just below its next resistance level. 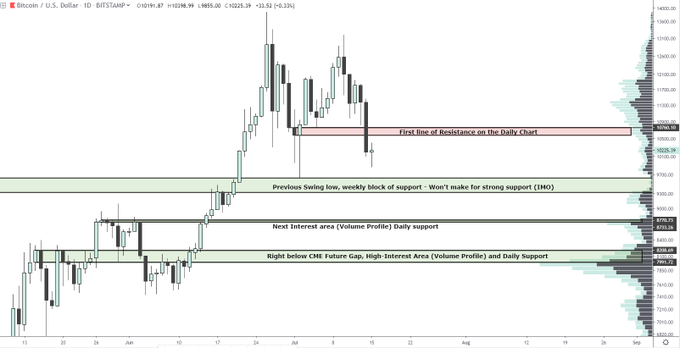 Current levels that I'm watching on the chart

Explain it in more detail at http://t.me/joshrager


90 people are talking about this

As fears surrounding a regulatory crackdown fade with time, it is highly likely that the impact of President Trump’s negative comments on Bitcoin will have a negligible effect on the markets.