How and Why Do Planets Die?

Most planets can exist for a long, long time, but they can't last forever. Hungry stars and violent planetary neighbors can completely destroy a world, while impacts and excessive volcanism can render a habitable world sterile by stripping the planet of its water. There are also lots of theoretical ways that might spell a planet's end but haven't, as far as we know.

"Planets die all the time right in our galactic neighborhood," Sean Raymond, a planetary modeler at the Laboratoire d'Astrophysique de Bordeaux in Bordeaux, France, wrote in his blog series on how planet for. Raymond has investigated myriad ways that planets might meet their end. While not all planets die, most eventually find their way to the planetary morgue. Earth's climate cycle plays an important role in making sure the planet is neither too hot nor too cold to sustain life. But it doesn't take much for the climate on a rocky world such as Earth to get thrown out of whack, triggering events leading to either an incredibly hot planet or a snowball world.

If carbon dioxide accumulates in the atmosphere faster than it can be reabsorbed into the rocks, because of something like increased volcanic activity, for example, it can trigger a runaway greenhouse effect. Temperatures can rise above the boiling point of water, which can be a problem for sustaining life, seeing as all life as we know it requires water. Rising temperatures can also allow the atmosphere to escape into space, removing the protective shield that deflects radiation from a planet's sun and other stars. 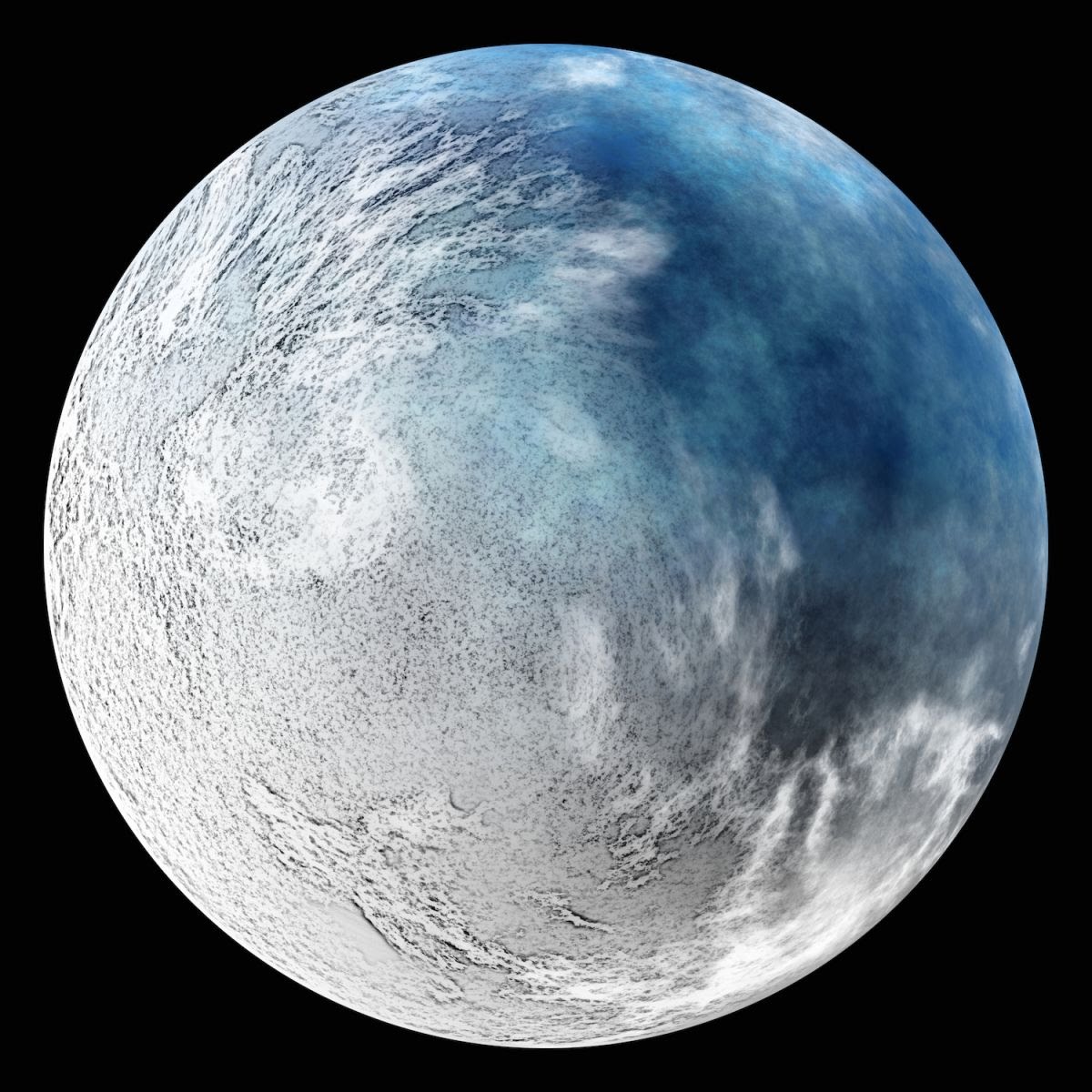 An artist's conception of a frozen planet. If a planet gets cold enough, it could become a snowball world.

"Greenhouse heating is a fact of life for an atmosphere, and desirable to some degree," Raymond wrote. "But things can get out of hand."

Heat isn't the only way climate can turn deadly. When a planet gets cold enough, that body turns into a snowball world, a rocky object covered in ice. Ice and snow are bright and reflect much of a star's heat back into space, causing the world to cool down even further. On a world with surface volcanoes, eruptions can dump carbon dioxide and other gases back into the atmosphere, heating the world back up. But if the snowball conditions occur on a planet that lacks plate tectonics — and therefore, volcanoes — the world may be permanently locked in a snowball state.

According to Raymond, all potentially life-bearing planets run the risk of climate catastrophe, which can render a planet uninhabitable but not destroy it completely.

The tug of neighboring worlds can pull on a planet's orbit, which puts pressure on the planet's interior and increases the heat of the Earth’s middle layer, the mantle. That heat must find a way to escape, and the most typical method is through a volcano.

Volcanic activity can significantly affect the environment of a planet. According to the University Cooperation for Atmospheric Research, gas and dust particles thrown into the atmosphere by a volcano can affect a planet's atmosphere, cooling the planet and shading it from incoming radiation. In 1815, the eruption of Mount Tambora, the largest eruption in Earth's recorded history, threw up so much ash that it lowered global temperatures, making 1816 the so-called "year without a summer."

Volcanoes can also cause the opposite effect — global warming — as they release greenhouse gases into the atmosphere. Frequent and large volcanic eruptions could trigger a runaway greenhouse effect that would turn a habitable world like Earth into something more like Venus.

We don't have to look far for a real-life example of a volcano world. Jupiter's moon lo is the most volcanically active body in the solar system, with hundreds of volcanoes that are continuously erupting. If Earth were tugged as much as Io is tugged by the gravitational force of Jupiter, Earth would have 10 times more volcanic activity than Io, according to Raymond.

Rocky asteroids and icy comets are planetary "crumbs" that can cause significant problems to their neighboring worlds, especially when they are hurled by ice and gas giants.

As the planets settle into their final orbits, their gravitational tugs can move asteroids and comets around. Some can be pushed into the outskirts of the planetary system, while others are hurled inward, eventually colliding with rocky worlds, where life may be trying to evolve.

In our outer solar system, Neptune's final movements as it settled into its permanent orbit shoved multiple comets inward, passing them from planet to planet until they reached Jupiter. Jupiter tossed some of these icy bodies outward, but others were hurled inward toward Earth during a period known as theLate Heavy Bombardment.

An artist's concept of the early Earth shows a surface pummeled by large impacts.

Today, Earth is constantly accumulating about 100 tons (90 metric tons) of interplanetary material each day in the form of dust. Objects larger than about 330 feet (100 meters) crash down to the surface only about once every 10,000 years, while bodies larger than two-thirds of a mile (1 kilometer) crash down only once every several 100,000 years, according to NASA's Center for Near Earth Objects Studies.

When giant planets are tossing these destructive crumbs toward the sun, collisions spike, and impacts happen more often. Medium-size objects can toss up dust and debris into the atmosphere, which can interfere with atmospheric processes. Giant impacts can cause even more dire effects, not only because of the devastation at ground zero, but also because they may throw up enough debris to cause an impact winter, throwing the planet into a mini ice age. With enough impacts fired off in a row, the climate effects could build on one another until they eventually rendered the world uninhabitable.

Based on observations of the planetary leftovers found around other stars, Raymond calculated that about 1 billion Earth-like planets in the galaxy will eventually be destroyed by a bombardment of asteroids.

As the most massive object in the solar system after the sun, Jupiter acts like a protective big brother, shielding the smaller rocky planets from debris, and giants around other worlds likely play the same role. But if a gas giant like Jupiter were to become unstable, it could have a devastating effect on the smaller worlds around it.

After stars form, the disk of leftover material gives rise to planets. Gravitational tugs from the gas and dust in the disk exert a force on the planets and can keep gas giants in line for the first few million years. Once it is gone, however, the planets can change their orbits more easily. Because giant planets are much smaller than their rocky siblings, their gravitational pushes can make a significant difference in shifting the orbits of smaller planets. But large worlds aren’t immune; two giant planets can tug at each other, and may even pass extremely close to one another. According to Raymond, these giants rarely collide, instead providing gravitational kicks to one another. Eventually, some worlds could be kicked out of orbit completely and become consigned to floating through space unattached to any stars.

Raymond calculated that roughly 5 billion rocky worlds have been destroyed by gas giants. Most of the destruction probably happened soon after the planets formed. However, a handful probably happened later in the system's lifetime, after life had time to evolve. If only 1% of the gas giants became unstable later in their planetary lifetime, then it's possible that 50 million planetary systems have destroyed inhabited worlds by tossing them into their star.

One way planets can be destroyed is by colliding with one another, but that probably doesn't happen all that often.

Like planets, stars can come to an end, and their transformation can have drastic effects on the planets that orbit them.

Red dwarf stars, for example, may take more than 100 million years to reach their long-term brightness, ten times longer than our sun. Planets orbiting a red dwarf may be within the habitable zone for a few million years, but as the star grows brighter, any life-sustaining water may evaporate away under the higher temperatures.

But planets orbiting a hot, red dwarf could still sustain life. "We don't know whether this process dries out planets completely or just strips off a few outer layers of ocean," Raymond wrote. "If a planet has enough water trapped in its interior (Earth is thought to have a few times its surface water in the mantle), then it could withstand losing its oceans by later outgassing new ones. It's a complex interplay between geology and astronomy and the outcome is unknown — for now." Raymond estimated that 100 billion planets may have been dried out by their red dwarf.

Sunlike-stars give habitable planets more time to hold on to water, giving life a chance. But the sun's temperature is also changing, slowly brightening over billions of years. In a billion years, Raymond said, the planet will no longer be in the habitable zone; water will no longer remain liquid on Earth's surface. Instead, the planet will undergo a rapid greenhouse effect and eventually wind up looking like Venus.

When a sun-like star reaches 10 billion years old, it will run out of hydrogen and expand to somewhere between 100 and 200 times its current size. (Our sun is 4.5 billion years old, so we have some time before this happens.) In the solar system, Venus and Mercury will be swallowed by the star, while the sun’s changing gravity will push Mars and the outer planets farther out. Earth is right on the edge and may suffer either fate. Roughly 4 billion rocky worlds are likely consumed by a slowly brightening star.

The most massive stars explode infiery supernova after a relatively short lifetime of a few million years. No planets have been found around these massive stars, but that could be because there are so few massive stars to search, and exoplanets are still hard to find, Raymond wrote. Either way, any planets around these giant stars will likely be destroyed by the star's explosive death.